Recently I, along with my team at Evolute, walked through the doors of a Fortune 5 company with a single goal — move an application over to the latest, greatest generation of the cloud — the container. For the past three years, we have been reveling in the fact that enterprises can leverage containers to improve efficiency. Accomplishments such as creating the next best scheduler, arriving at the most PAXOS compliant service discovery or providing bluer and greener deployments, would be difficult at best, without containers.

I’m not going to take anyone’s time promoting containers, the advantages are so obvious, no one needs to make the argument. Instead, I’ve focused this piece, along with my career, to ensuring companies quickly and rapidly achieve the latest cloud scale capabilities needed to advance their organization. Personally, I measure successful adoption based on the ability to achieve feature parity (or runtime “compatibility”) of any software in this more native and scalable artifact. While the path to containerization can be fraught with pitfalls, it’s also filled with the excitement of more intricately achieving your organization’s goals with every detail of how you position and scale your software, environment, and infrastructure.

So what to do? Below are my top tips.

#5 BELIEVE…that every application has a path

Whether it’s showcasing the ability to streamline any Linux-based application to containers within minutes, taking software previously destined for virtualization environments, e.g. whether based on an L4 microkernel (thank you to our folks at Intel for the challenge), or enabling POSIX-based containers on a zfs-backed and Solaris-zones based OS… we at Evolute have yet to find an application we could not move to the container technology.

Thus our first recommendation is to believe that it is possible (read on for more ways in which we’ve been able to make this possible).

We recently did a blind test where, unbeknownst to our targets, we ran software to cross two architectural distances into container technology. We did the test after being challenged by a new business unit at one of our large customers. In front of our customer, along with industry experts from all walks of the tech globe, we had the opportunity to move over an unspecified application which would only be presented to us at an isolated site in the hills of California. If it were not for Evolute’s binary, configuration and data framework, along with our belief in OSI (i.e. systems were made to communicate no matter how disparate the technology), we would not have been able to achieve success in under 48 hours. 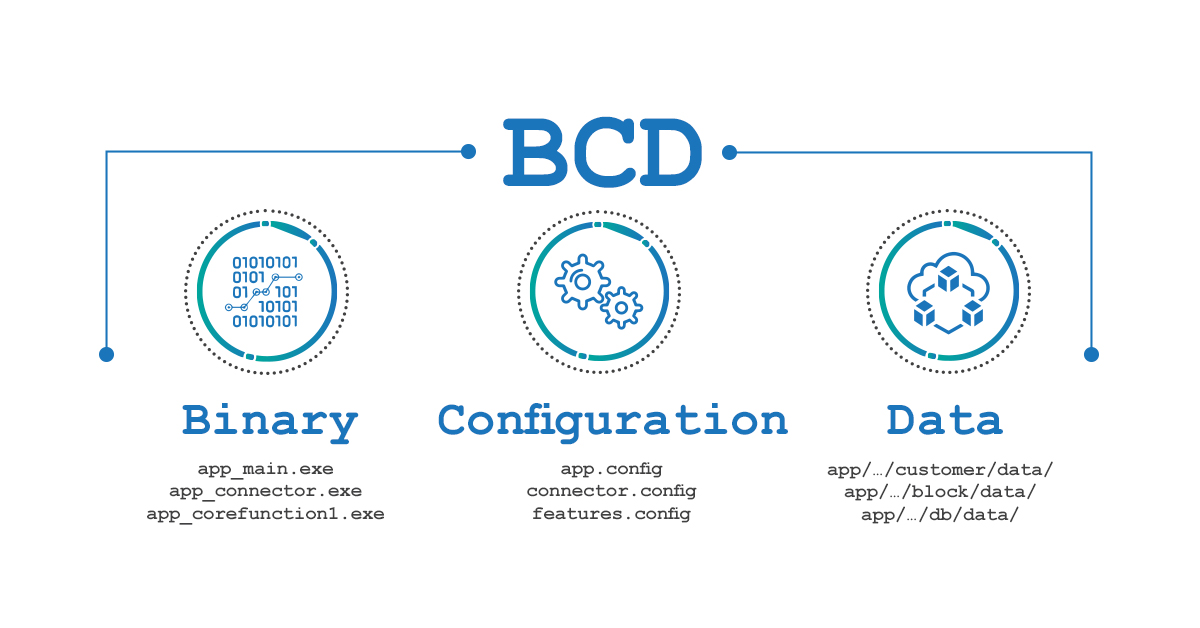 As software travels through Evolute’s migration process, we have to analyze (source and destination environments) and create a predetermined path for runtime compatibility*.

In the above framework, we believe all applications can be dissected based on the breadcrumbs and insights of its runtime specification to be processed as one of these three artifacts. Quite simply, we no longer view software as an infinite set of functions and features but the pathway between two disparate architectures.

In a future article, we’ll cover how Evolute’s software is able to dissect, discern, process and automate software between disparate architectures. Albeit our categorization in BCD provides a pre-process (input) or process (translation) into the destination artifact (i.e. containers) independent of its step (e.g. intermediate language and dependency parsing) or phase (i.e. software instantiation).

As a result, we seek to either remove or replace dynamic information to the system. This ensures all applications map and/or contain their dependent application libraries. This coupled with having data come over to the resultant destination’s storage system is imperative in order to achieve successful migration and/or instantiation in a single execution. In the note(*) below, we also leverage things like network connectivity inform us of the relationships between software and systems.

* In the latest version of our software, we are able to carve up an application into more microservice-like topologies, instruments its container manifest and perform execution alongside a user-driven API for achieving transformation.

Lesson — pay attention to your patterns — they do repeat themselves after all.

#3 What is Your Software Saying?

From storage-level translations in its rawest forms to data science, we can perform on the application and operating system to understand software uniqueness and path (to BCD), the single most important factor is typically the application software.

Despite being the most variant component, it is also the most telling. It provides inferences to the software architecture and configuration and gives us insight into how we’ll use the software, connectivity and its data. For those creating a systematic approach to achieving containerization in their organization, the ability to parse application dependencies by software language, understanding intermediate languages and other environmental artifacts creates a perfect foundation for achieving “stage 1 containerization”.

In the blind test, insights into the intermediary language (in this case Visual C++) provided us all the runtime components we needed in order to achieve success in auto-containerization for multiple software components (and thus applications).

Containers are meant to be the lightest weight Ockham-based artifact for software mobilization and thus should include only what we need in order to be successful. We quickly learned this years ago via 12-factor applications as we came into cloud-native development.

Countless times we’ve found “extra screws” or rather functions and features that were not used in a production software’s environment. While this accentuates the case for our approach to achieving software modernization even if just in the midterm, it’s absolutely critical in creating the fastest path to our destination. Production operators (and Innersourcers) should always look to “remove” those pieces which do not contribute to the business operations or application environment’s runtime success.

As we reviewed the application above, we recognized there were four services albeit only three were ever running. Simply put, we ensured we do not have additional “runtime” components although our software installation might originally tell us we should be operating everything.**

*The following manifests are examples of early prototyping used on our first application executions through the framework:

In the software’s original installation, additional service was included and started. By breaking down the underlying software libraries (e.g. DLLs and application executables), and understanding (first) its runtime state, we are able to ensure the default configuration in containers achieves the appropriate state.

Note**: As with big data in industry application, the actual data from a runtime environment is a better approximation for the actual destination a software or its surrounding infrastructure should achieve. We thus leverage this same logic in our software and operations to achieve the greatest percentage of runtime and operational success we’ve seen to date.

Last but not least, understanding why enterprises are moving towards containerization is important. While Evolute’s sole purpose is to ensure every company achieve the same capabilities as Apple’s Siri and Google within their core business functions, it requires that we not only consider what we’re doing (containerizing), but why we’re doing it (speed to deployment, runtime simplicity, scalability et al. which lead to a business’s ability to be more agile or more aptly compete in its respective industry).

Our migration technology has proven that it can move data whether connected directly to the application, the host or remotely via a share or storage — this increases the speed to which organizations can adopt the container technology. While this is championed, none of that matters unless we are achieving the results for which the business function needs us to obtain — simply put, the source’s software data, operating environment and execution architecture typically provide insight into where we need to head with the business outcome and why.

In the below example, we’ll show the capability developed for two disparate (Windows, don’t hurt me guys) applications and how the resulting containerization strategy might be different per the use of the technology and organization’s goals.

In the code snippet above, success in this environment could not be achieved without this artifact (the software manifest) as the ability to repeat the packaged execution (e.g. infrastructure as code, or multi-datacenter computing known as hybrid cloud) means we need the ability to rapidly recreate the containerized software artifact no matter the distance between sites or size of applications and its data. The repeatability of achieving the cloud artifact within minutes across multiple cloud environments becomes the solution to our challenge of portability, as defined by the use of the container MANIFEST, often confused amongst technologist, software leaders and their business counterparts.

See example manifest taken from migrated software above. It is worth noting destination above has been automated in Linux and is an early prototype of Evolute container migration for Windows.

In this example, we take a desktop (or server) application into a pre-packaged format to be distributed across a cross-platform container architecture.

In the above example, we showcase an application which has been pre-processed (AppX) so that it can achieve container-native functionality (e.g. the installation or uninstallation in second level installs/uninstalls, among other cloud and business agility features) and has the ability to be easily updated in a container runtime environment. The following steps allow the software to be pre-processed for automation and distribution in the cloud environment (with full process automation in our coming release): 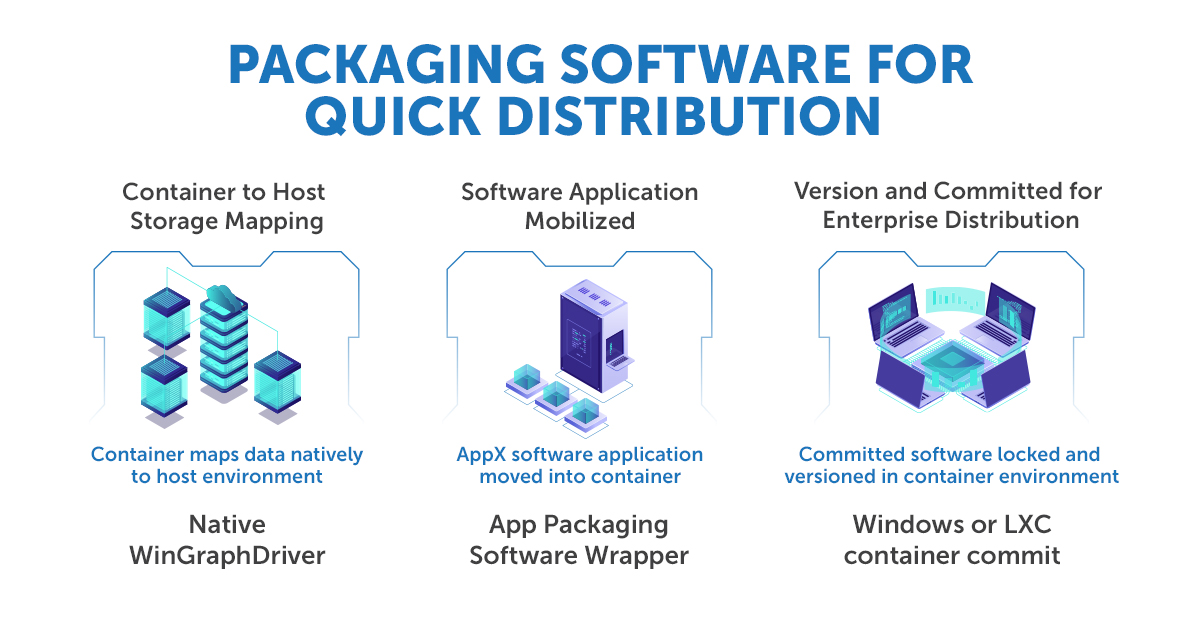 …Upon successful exit, the application is ready for re-deployment with enterprise container or application environment and runtime compatibility of existing software environments (e.g. Docker). In this example, we’re able to mobilize even desktop applications in the Evolute cloud and edge environment.

The end result of the above software is its ability to be distributed across edge and/or cloud environments independent of the operational goal needed to be achieved; this hybrid approach allows for a single runtime across multiple disparate organization (i.e. an enterprise) allowing for software to be operationalized independent of its ecosystem’s demand***.

With both use cases, it’s important to note the software’s vendor had been engaged for over a year without the ability to provide a suitable cloud configuration or container alternative.

Note***: In future articles, we’ll dive into how multi-access edge compute, CAP Theorem (traditionally leveraged in cloud tradeoffs) and runtime processing of these applications are leveraged to achieve scalability across software services and enterprise based clouds.

While moving software to containers may not be the newest and most native approach to achieving scalability in the cloud, enterprises currently use hundreds to thousands of applications in business critical functions which need to interoperate or at least be able to scale to the extent of its service-based, serverless, or up and coming “microservices” incumbents.

Through ensuring software has a path to containerization, we allow organizations to achieve new and more agile functions closer to the scalability and impact of existing industry giants across tech. As we learned in this latest path to achieve software success for yet another operating system and set of software challenges, the path forward means Evolute and our industry’s ability to modernization any application or organization to achieve its latest generation of software and cloud service capabilities independent of its cloud or operating environment.

Business Containers News Technology
Sounds too good to be true?
Let us prove it.